Taking The Plunge: Becoming a Pilates Instructor Part 1 of 9 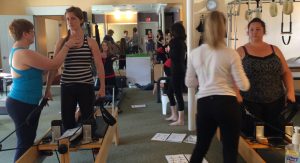 About four years ago, I met a young man at The Pilates Studio.  He came to me with what his doctor called Upper and Lower Cross Syndrome.  He was nineteen and it was clear upon first glance that he had spent some time around free weights.  His shoulders were huge! After we chatted for a bit we discovered that the postures caused by this upper cross syndrome (a name I take issue with.) were affecting his college life in ways that he did not love.  I had him for just a few sessions and then I sent him off to Germany (semester abroad) with a foam roller and some good luck.  Who knew that becoming a Pilates Instructor would be part of his journey.

When he got back from Germany on the next break from school he came back with some other things to work on, and this is when I found out that his major had changed.  He was now pre-med. I thought this was a perfect choice for him. He was so thoughtful about his own healing process and he was very curious, wonderfully curious about theory and the thought process behind the movements that I was giving to him.  We worked together a few times and then I sent him away for another semester.

At the next semester break I saw this young man’s name in my schedule again, and I thought to myself. You know he should do the Polestar Pilates Comprehensive series.  He could pay his way through medical school, and gain skills in communication and education that will make him a better doctor in the future. It’s a win, win. I mentioned this to him on his next session, and he was so excited.  He signed up later that month and he was a great addition to the cohort.

During his journey toward becoming a Pilates Instructor, he gained knowledge of biomechanics, and arthrokinematics as they relate to movement, not to mention gained great practice in thinking in systems instead of body parts.  He spent times in movement labs thinking and practicing the different ways to communicate when teaching movement. He practiced using imagery and voice inflection. He also spent a great amount of time working on his own healing process.  All in all during the year and a half that he was in the course and then subsequently preparing for his exam, his worldview changed. And it is this worldview that is going to inform who he becomes as a physician, and I can’t wait to see how his career develops.